Get the facts about porcelain tile flooring
Request a Quote

The work on the pool at Colgan school was hard work and a great challenge for the Revest team, which ended with a great recognition from the entire board of those responsible for the renovation of the pool!

Revest was contracted to install approximately 9,000ft2 of ceramic tile flooring with waterproofing around the swimming pool of the Colgan High School aquatic center in Manassas, Virginia, located about 30 miles southwest of Washington, DC.

The school, located at 13833 Dumfries Rd, was inaugurated in August 2016 and the new tile flooring installed in 2020. The aquatics center, which is open to the public, has several attractions including a 40-meter heated pool with eight 25-yard lanes, two diving boards, a shallow water area, and a waterslide.

We started the work with a short-time challenge to fix many details of work that were poorly executed by those previously responsible for the concrete. We had to redo practically all the concrete and the linear drains that were already placed and could not be moved. Therefore, we had to lift all the concrete close to the drains as the slopes specified by law were more than twice the allowed limit!

The drains could no longer be used due to the depth they were installed and there was no way to remove them! The new drains would take up to 6 months to be delivered leaving the swimming pool totally paralyzed. 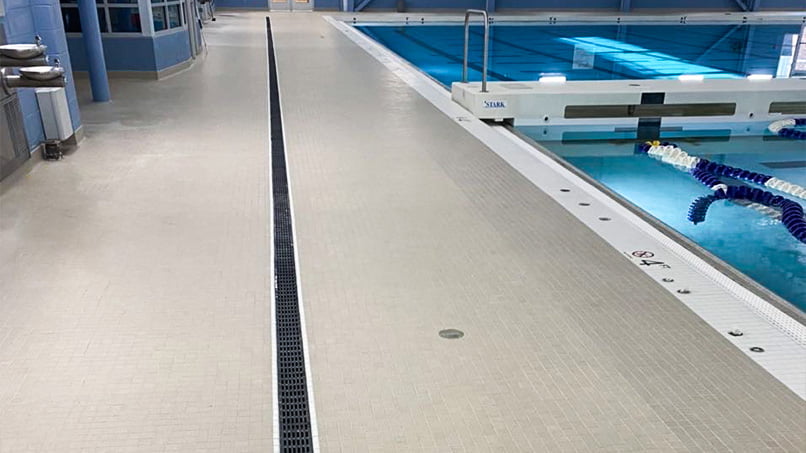 This was where the Revest team and its collaborators started the artisanal work of manufacturing the linear drain coming very close to the original, avoiding the delay!

The Revest team proved once again to be able to perform the best work in less-than-ideal conditions to complete a project that was approved and praised by many!

Fill out the form below or give us a call to schedule your free on-site visit.

During our visit, we’ll take measurements and answer your questions.

Receive your personalized quote with multiple options within 48 hours.

GET YOUR FREE QUOTE

Our team of experts would love to hear from you.

Your information is secure. We do not spam.

We will get back to you as soon as possible to schedule your quote and answer questions.

This is a secure form. We don’t spam.